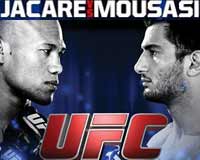 Review: 2014-09-05, technical fight with a pretty good finish but it was not so exciting: Ronaldo ‘Jacare’ Souza vs Gegard Mousasi 2 gets two stars (UFC Performance of the Night). The black belt in Bjj and judo Ronaldo ‘Jacare’ Souza entered this fight with a pro mma record of 20-3-0 (80% finishing rate) and he is ranked as the No.5 middleweight in the world (currently the #1 in this division is Strikeforce Mw title (=Chris Weidman), he suffered his last defeat when he faced Luke Rockhold in 2011 losing his Strikeforce Mw title (=Rockhold vs Jacare ), since then he has collected six consecutive wins (three under Strikeforce and three in the Ufc).
His opponent, the former Strikeforce light-Hw champion and black belt in judo Gegard Mousasi, has a record of 35-4-2 (86% finishing rate) and he entered as the No.6 in the same weight class, he has already fought twice in 2014 losing the first bout, against Lyoto Machida in February (=Machida vs Mousasi), but then he came back to win against Mark Munoz in May (=Munoz vs Mousasi). In their first fight Mousasi defeated Jacare in just one round (on September 23, 2008) and the bout was valid for the Dream Mw title; this second fight is the main event of Ufc Fight Night 50 (Ufc Foxwoods). Watch the video and rate this fight!