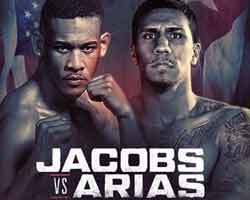 Review by AllTheBestFights.com: 2017-11-11, fight not particularly exciting between Daniel Jacobs and Luis Arias: it gets two stars.

The former Wba Mw champion Daniel Jacobs entered this fight with a record of 32-2-0 (29 KOs=91%) and he is ranked as the No.4 middleweight in the world (currently the #1 in this division is Saul ‘Canelo’ Alvarez). He beat Sergio Mora last year (=Jacobs vs Mora 2) but then he has lost to Gennady Golovkin in 2017 (=Golovkin vs Jacobs).
His opponent, Luis Arias, has a perfect boxing record of 18-0-0 (9 knockouts) and he entered as the No.17 in the same weight class. He has already fought twice in 2017 winning over Scott Sigmon and Arif Magmedov (=Magomedov vs Arias). Jacobs vs Arias is the main event of the evening. Watch the video and rate this fight!

(Free embeddable video hosted on Ok.ru and not uploaded by AllTheBestFights)
https://www.youtube.com/watch?v=a35Z8QCV3HQ