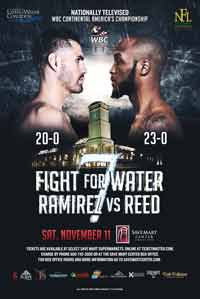 Review by AllTheBestFights.com: 2017-11-11, pretty good finish between Jose Ramirez and Mike Reed but it is not enough to get three stars: it gets two.

Both undefeated, the Olympian Jose Carlos Ramirez entered this fight with a perfect record of 20-0-0 (15 KOs=75%) and he is ranked as the No.34 super lightweight in the world while his opponent, Mike Reed, has a boxing record of 23-0-0 (12 knockouts) and he entered as the No.48 in the same weight class. Ramirez has fought once in 2017 beating Jake Giuriceo while Reed has fought twice defeating Reyes Sanchez and Robert Frankel. Ramirez vs Reed is valid for the WBC Continental Americas super lightweight title. Watch the video and rate this fight!