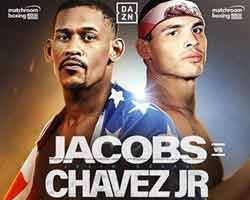 The former Wba and current Ibf Mw champ Daniel Jacobs entered this fight with a professional boxing record of 35-3-0 (29 KO=83%) and he is ranked as the No.2 super middleweight in the world (currently the #1 in this division is Callum Smith) but he comes off the loss against Saul Canelo Alvarez (Saul Canelo Alvarez vs Daniel Jacobs). Before this bout, in 2018, he had defeated Maciej Sulecki in April (Daniel Jacobs vs Maciej Sulecki) and Sergiy Derevyanchenko in October (Daniel Jacobs vs Sergiy Derevyanchenko).
His opponent, the former Wbc Mw champion Julio Cesar Chavez Jr, has an official record of 51-3-1 (33 knockouts) and he entered as the No.29 light heavyweight. He was also defeated by Canelo, in 2017 (Saul Canelo Alvarez vs Julio Cesar Chavez Jr), but he came back to win against Evert Bravo in 2019 (Julio Cesar Chavez Jr vs Evert Bravo). Jacobs vs Chavez is the main event of the evening. Watch the video and rate this fight!