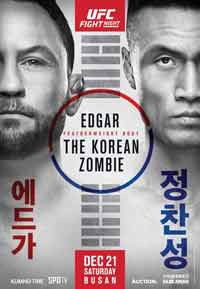 Review by AllTheBestFights.com: 2019-12-21, good exchanges between Alexandre Pantoja and Matt Schnell: it gets three stars (UFC Performance of the Night).

Alexandre Pantoja entered this fight with a professional record of 21-4-0 (71% finishing rate) and he is ranked as the No.4 flyweight in the world (currently the #1 in this division is Joseph Benavidez). He fought twice in 2019 beating Wilson Reis (Alexandre Pantoja vs Wilson Reis) and losing to Deiveson Figueiredo (Alexandre Pantoja vs Deiveson Figueiredo).
His opponent, the black belt in karate Matt Schnell, has a mma record of 14-4-0 (72% finishing rate) and he entered as the No.8 in the same weight class. He lost two consecutive bouts between 2016 and 2017, against Rob Font and Hector Sandoval, but then he has won four fights beating Louis Smolka amd Jordan Espinosa in 2019 (Jordan Espinosa vs Matt Schnell). Pantoja vs Schnell is on the undercard of Frankie Edgar vs Chan Sung Jung – UFC Fight Night 165. Watch the video and rate this fight!