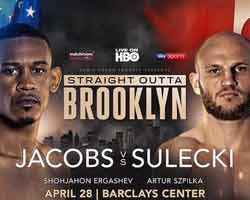 Review by AllTheBestFights.com: 2018-04-28, good fight between Daniel Jacobs and Maciej Sulecki: it gets three stars.

The former Wba Mw champion Daniel Jacobs entered this fight with a pro record of 33-2-0 (29 KOs=88%) and he is ranked as the No.4 middleweight in the world. He fought twice last year losing to #1 Gennady Golovkin (Golovkin vs Jacobs) and beating Luis Arias (Daniel Jacobs vs Luis Arias).
His opponent, the undefeated Maciej Sulecki, has a perfect record of 26-0-0 (10 knockouts) and he entered as the No.4 super welterweight. He fought three times in 2017 winning over Michi Munoz, Damian Ezequiel Bonelli and Jack Culcay (Maciej Sulecki vs Jack Culcay). Jacobs vs Sulecki is the WBA final middleweight title eliminator. Watch the video and rate this fight!

(Free embeddable video hosted on Youtube and not uploaded by AllTheBestFights)
https://www.youtube.com/watch?v=y2R5J30QYyk