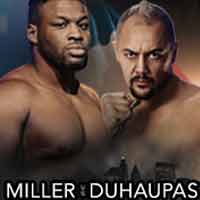 Review by AllTheBestFights.com: 2018-04-28, some good exchanges between Jarrell Miller and Johann Duhaupas but it is not enough to get three stars: it gets two.

The undefeated Jarrell Miller entered this fight with a record of 20-0-1 (18 KOs=90%) and he is ranked as the No.7 heavyweight in the world (currently the #1 in this division is Anthony Joshua). The only man who stopped him in a draw was Joey Dawejko in 2013, since then ‘Big Baby’ Miller has collected 16 consecutive victories beating Fred Kassi (Miller vs Kassi), Gerald Washington (Miller vs Washington) and Mariusz Wach in his last three (Jarrell Miller vs Mariusz Wach).
His opponent, Johann Duhaupas, has an official boxing record of 37-4-0 (24 knockouts) and he entered as the No.13 in the same weight class. He lost to Alexander Povetkin in 2016 (Alexander Povetkin vs Johann Duhaupas) but then he has beat Davit Gogishvili, Evgeny Orlov and Newfel Ouatah. Miller vs Duhaupas is on the undercard of Daniel Jacobs vs Maciej Sulecki. Watch the video and rate this fight!