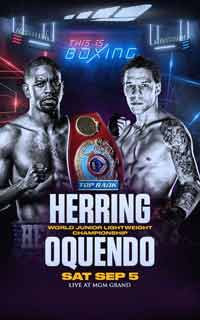 Review by AllTheBestFights.com: 2020-09-05, disappointing fight between Jamel Herring and Jonathan Oquendo: it gets wo stars.
The former Olympian and current Wbo super-Fw champion Jamel Herring entered this fight with a pro boxing record of 21-2-0 (10 knockouts) and he is ranked as the No.9 super featherweight in the world (currently the #1 in this division is Miguel Berchelt). He was defeated by Ladarius Miller in 2017, but then he has won five consecutive bouts defeating Masayuki Ito (Masayuki Ito vs Jamel Herring) and Lamont Roach in 2019 (Jamel Herring vs Lamont Roach).
His opponent, Jonathan Oquendo, has a record of 31-6-0 (19 knockouts) and he entered as the No.37 in the same weight class. He fought twice last year losing to Lamont Roach and beating Charles Huerta. Oquendo vs Herring is valid for the WBO World super featherweight title (Herring’s second defense). Watch the video and rate this fight!