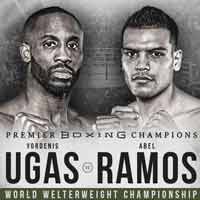 Review by AllTheBestFights.com: 2020-09-06, pretty good fight between Yordenis Ugas and Abel Ramos: it gets three stars.
The former Olympian Yordenis Ugas entered this fight with a professional record of 25-4-0 (12 knockouts) and he is ranked as the No.7 welterweight in the world (currently the #1 in this division is Errol Spence Jr). He lost to Shawn Porter last year (via split decision, Shawn Porter vs Yordenis Ugas) but then he has beat Omar Figueroa Jr (Yordenis Ugas vs Omar Figueroa Jr) and Mike Dallas Jr (Yordenis Ugas vs Mike Dallas Jr).
His opponent, Abel Ramos, has a record of 26-3-2 (20 KOs=77%) and he entered as the No.21 in the same weight class. He was defeated by Jamal James in 2018 (Jamal James vs Abel Ramos) but then he has won eight consecutive bouts defeating Francisco Santana (Francisco Santana vs Abel Ramos), Jimmy Williams and Bryant Perrella in his last three. Ramos vs Ugas is valid for the vacant WBA World welterweight title. Watch the video and rate this fight!