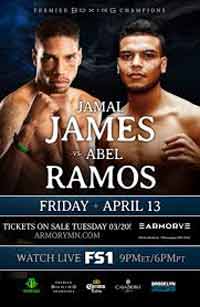 Jamal James entered this fight with a pro boxing record of 22-1-0 (10 knockouts) and he is ranked as the No.13 welterweight in the world. He lost to Yordenis Ugas in 2016 but he came back to win with Ionut Dan Ion and Diego Gabriel Chaves in 2017 (Diego Gabriel Chaves vs Jamal James).
His opponent, Abel Ramos, has a record of 18-2-2 (13 knockouts) and he also fought twice last year losing to Ivan Baranchyk (4-stars fight, Ivan Baranchyk vs Abel Ramos) and beating Emmanuel Robles. James vs Ramos is the main event of the evening. Watch the video and rate this fight!