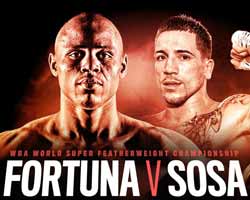 Review by AllTheBestFights.com: 2016-06-24, some good exchanges between Javier Fortuna and Jason Sosa but it is not enough to get three stars, it gets two.

The undefeated Javier Fortuna entered this fight with a professional boxing record of 29-0-1 (21 knockouts) and he is ranked as the No.1 super featherweight in the world. The only man who stopped him in a draw was Luis Franco in 2013 (=Fortuna vs Franco), after this bout he has won seven fights beating Carlos Ivan Velasquez in his last one (=Fortuna vs Velasquez).
His opponent, Jason Sosa, has an official record of 18-1-4 (14 KOs=78%) and he entered as the No.11 in the same weight class. He suffered his only loss when he faced Tre’Sean Wiggins in 2010, since then he has collected 15 wins and three draws, the last one against Nicholas Walters in his last bout (=Walters vs Sosa). ‘El Abejon ‘ Fortuna vs Sosa is valid for the WBA World super featherweight title. Watch the video and rate this fight!