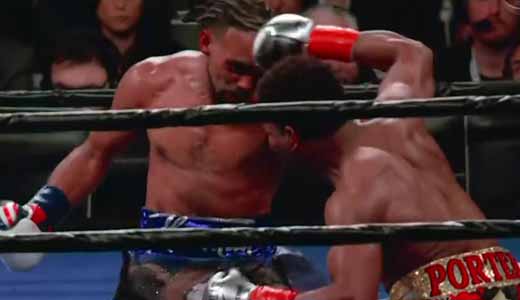 Review by AllTheBestFights.com: 2016-06-25, very close and exciting fight from the first period thanks to an amazing performance by both boxers: Keith Thurman vs Shawn Porter is one of the best boxing fights of 2016 and it gets four stars!

The undefeated Keith Thurman entered this fight with a perfect record of 26-0-0 (22 KOs=85%) and he is ranked as the No.1 welterweight in the world. He fought twice last year winning over Robert Guerrero (=Thurman vs Guerrero) and Luis Collazo (=Thurman vs Collazo).
His opponent, the former Ibf Ww champion Shawn Porter, has an official record of 26-1-1 (16 knockouts) but he is not ranked as he hasn’t fought since June 20, 2015 when he beat Adrien Broner (=Broner vs Porter). He suffered his only loss against Kell Brook in 2014 (=Porter vs Brook) but then he defeated Erick Bone in 2015 (=Porter vs Bone). Thurman vs Porter is valid for the WBA World welterweight title. Watch the video and rate this fight!