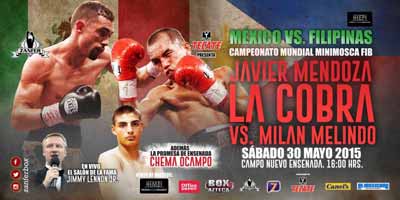 Review by AllTheBestFights.com: 2015-05-30, nice exchanges between Milan Melindo and Javier Mendoza: it gets three stars.

Milan Melindo entered this fight with a professional boxing record of 32-1-0 (12 knockouts) and he is ranked as the No.7 light flyweight in the world (currently the #1 in this division is Pedro Guevara). He suffered his only loss in 2013 when he faced Juan Francisco Estrada for the Wbo and Wba Flw titles (=Estrada vs Melindo), after this bout he has won three fights beating Saul Juarez in his last one (=Melindo vs Juarez).
His opponent, Javier Mendoza, has an official record of 23-2-1 (19 KOs=82%) and he entered as the No.17 in the same weight class. His last loss occurred in 2011, against Jorge Guerrero, but since then he has collected ten consecutive victories winning the vacant Ibf light-Flw title in 2014 against Ramon Garcia Hirales (=Mendoza vs Hirales); after this bout he beat Mauricio Fuentes but his belt was not on the line (=Mendoza vs Fuentes). Melindo vs Mendoza is valid for the IBF World light flyweight title (Mendoza’s first defense). Watch the video and rate this fight!