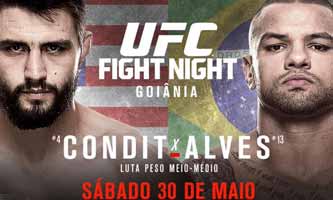 Review by AllTheBestFights.com: 2015-05-30, Carlos Condit vs Thiago Alves gets three stars thanks to a good second part of the fight.

The former WEC and interim Ufc Ww champion Carlos Condit entered this fight with a professional mma record of 29-8-0 (93% finishing rate) and he is ranked as the No.12 welterweight in the world but he won just one out of his last four fights, against Martin Kampmann in 2013 (=Condit vs Kampmann 2); after this bout he lost to Tyron Woodley (=Condit vs Woodley).
His opponent, Thiago Alves, has an official record of 21-9-0 (67% finishing rate) and he entered as the No.14 in the same weight class. ‘Pitbull’ Alves also faced Martin Kampmann but he was defeated by the Danish (in 2012, Kampmann vs Alves), after losing he came back to win beating Seth Baczynski and Jordan Mein (=Mein vs Alves). Condit vs Alves is the main event of UFC Fight Night 67. Watch the video and rate this fight!