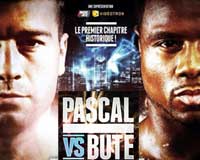 Review: 2014-01-18, nice fight with a very exciting finish: Jean Pascal vs Lucian Bute gets three stars. Jean Pascal entered this fight with a professional boxing record of 28-2-1 (17 knockouts) and he is ranked as the No.5 light heavyweight in the world, his only two defeats came to Carl Froch (4-stars fight of 2008) and to Bernard Hopkins in 2011 during their second fight. His opponent Lucian Bute has an official record of 31-1-0 (24 KOs=75%) and he is not ranked since he hasn’t fought since November 3, 2012 when he defeated Denis Grachev, but before that fight he suffered his first loss against Carl Froch (one of the best boxing fights of 2012 rated with four stars). Bute vs Pascal is scheduled as a light heavyweight fight, Pascal’s natural weight division, but not for Bute who used to fight as a super middleweight (currently the #1 in the light heavyweight division is Bernard Hopkins). Lucian Bute vs Jean Pascal is valid for the NABF light heavyweight title. Watch the video and rate this fight!

Video: (Free embeddable video hosted on Tagtele.com and not uploaded by AllTheBestFights, to report it please visit this link where the video is hosted)

Full-screen with double-click on the video