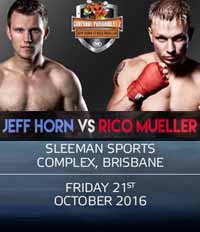 Review by AllTheBestFights.com: 2016-10-21, good fight between Jeff Horn and Rico Mueller: it gets three stars.

The undefeated Jeff Horn entered this fight with a pro record of 14-0-1 (9 knockouts) and he is ranked as the No.10 welterweight in the world (currently the #1 in this division is Manny Pacquiao). He has fought once in 2016 beating Randall Bailey (=Horn vs Bailey).
His opponent, Rico Mueller, has an official boxing record of 20-1-1 (14 knockouts) and he entered as the No.51 in the same weight class. He suffered his only loss when he faced Lukasz Maciec in 2010, since then he has won eleven consecutive bouts beating Viktor Hasselbach in his last one. Horn vs Mueller is valid for the IBF Inter-Continental welterweight title. Watch the video and rate this fight!