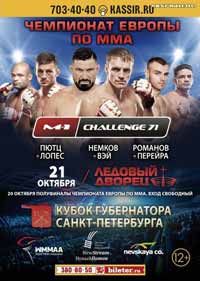 Review by AllTheBestFights.com: 2016-10-21, fight not so exciting between Viktor Nemkov and Attila Vegh: it gets two stars.

The 2011 World Combat Sambo and former M-1 light-Hw champion Viktor Nemkov entered this fight with a professional mma record of 23-6-0 (61% finishing rate) and he is ranked as the No.24 light heavyweight in the world but he comes off the loss against Rashid Yusupov (via split decision).
His opponent, the black belt in karate and former Bellator ligh-Hw champion Attila Vegh, has an official record of 29-7-2 (72% finishing rate) and he entered as the No.79 heavyweight but he lost his last three bouts: against Emanuel Newton (=Vegh vs Newton 2), Goran Reljic (=Vegh vs Reljic) and Alexander Volkov (=Volkov vs Vegh). Nemkov vs Vegh is the main event of the M-1 Challenge 71. Watch the video and rate this fight!