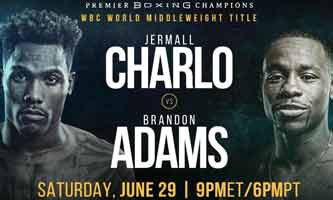 Review by AllTheBestFights.com: 2019-06-29, some good exchanges between Jermall Charlo and Brandon Adams but it is not enough to get three stars: it gets two.

The undefeated world champion in two different weight classes Jermall Charlo entered this fight with a professional record of 28-0-0 (21 KOs=75%) and he is ranked as the No.4 middleweight in the world (currently the #1 in this division is Saul ‘Canelo’ Alvarez). In his last three fights he has won over Jorge Sebastian Heiland (Jermall Charlo vs Jorge Sebastian Heiland), Hugo Centeno Jr (Jermall Charlo vs Hugo Centeno Jr) and Matt Korobov (Jermall Charlo vs Matt Korobov).
His opponent, Brandon Adams, has a boxing record of 21-2-0 (13 knockouts) and he entered as the No.14 in the same weight class. He lost to John Thompson in 2015 (Brandon Adams vs John Thompson) but then he has beat Tyrone Brunson, Ievgen Khytrov, Eric Walker and Shane Mosley Jr. Charlo vs Adams is valid for the WBC World middleweight title (Charlo’s second defense). Watch the video and rate this fight!