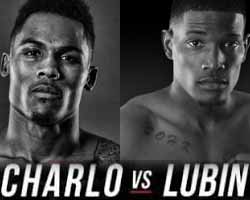 Review by AllTheBestFights.com: 2017-10-14, great finish between Jermell Charlo and Erickson Lubin: it gets three stars.

Both undefeated, the Wbc light-Mw champion Jermell Charlo entered this fight with a perfect boxing record of 29-0-0 (14 knockouts) and he is ranked as the No.3 super welterweight in the world (currently the #1 in this division is Erislandy Lara) while his opponent, Erickson Lubin, has an official record of 18-0-0 (13 knockouts) and he entered as the No.16 in the same weight class. In their last three bouts Charlo has beat Joachim Alcine (=Charlo vs Alcine), John Jackson (=Charlo vs Jackson) and Charles Hatley (=Charlo vs Hatley) while Lubin has won over Ivan Montero, Juan Ubaldo Cabreraand Jorge Cota (=
Lubin vs Cota). Charlo vs Lubin is valid for the WBC World super welterweight title (Charlo’s second defense); undercard of Erislandy Lara vs Terrell Gausha. Watch the video and rate this fight!