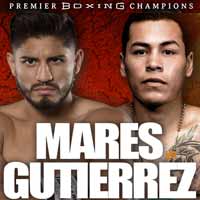 The world champion in three different weight classes Abner Mares entered this fight with a pro boxing record of 30-2-1 (15 knockouts) and he is ranked as the No.4 featherweight in the world. He lost to #1 Leo Santa Cruz in 2015 (=Santa Cruz vs Mares) but he came back to win in 2016 beating Jesus Andres Cuellar (=Cuellar vs Mares).
His opponent, Andres Gutierrez, has a record of 35-1-1 (25 knockouts) but he is not ranked as he hasn’t fought since October 8, 2016 when he defeated Wallington Orobio (=Gutierrez vs Orobio). Before this bout he had lost to Cristian Mijares (=Gutierrez vs Mijares). Mares vs Gutierrez is valid for the WBA World Featherweight title; undercard of Leo Santa Cruz vs Chris Avalos. Watch the video and rate this fight!