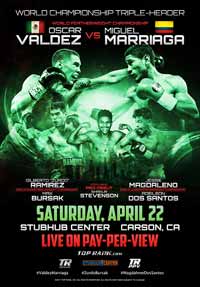 Review by AllTheBestFights.com: 2017-04-22, fight not so exciting between Jessie Magdaleno and Adeilson Dos Santos: it gets two stars.

The undefeated Wbo super-Bw champion Jessie Magdaleno entered this fight with a perfect boxing record of 24-0-0 (17 knockouts) and he is ranked as the No.2 super bantamweight in the world (currently the #1 in this division is Guillermo Rigondeaux). He fought twice last year beating Rey Perez and Nonito Donaire (=Donaire vs Magdaleno).
His opponent, Adeilson Dos Santos, has an official record of 18-2-0 (14 KOs=78%) and he entered as the No.68 in the same weight class. He fought three times in 2016 losing to Fabian Oscar Orozco and winning over Walberto Ramos and Devis Perez. Jessie Magdaleno vs Adeilson Dos Santos is valid for the WBO World super bantamweight title (Magdaleno’s first defense); undercard of Oscar Valdez vs Miguel Marriaga. Watch the video and rate this fight!