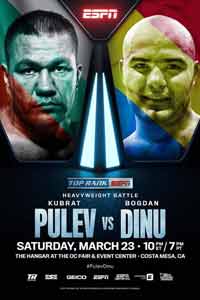 Review by AllTheBestFights.com: 2019-03-23, one sided fight between Jessie Magdaleno and Rico Ramos: it gets two stars.

The former Wbo super-Bw champion Jessie Magdaleno entered this fight with a record of 25-1-0 (18 knockouts) and he is ranked as the No.9 super bantamweight in the world but he comes off the loss against Isaac Dogboe (Jessie Magdaleno vs Isaac Dogboe); before this fight, in 2017, he had beat Adeilson Dos Santos (Jessie Magdaleno vs Adeilson Dos Santos).
His opponent, the former Wba super-Bw champ Rico Ramos, has a boxing record of 30-5-0 (14 knockouts) and he entered as the No.48 super featherweight. He lost to Claudio Marrero in 2015 (Claudio Marrero vs Rico Ramos) but since then he has collected six victories defeating Christian Esquivel and Daniel Olea in 2018. Magdaleno vs Ramos is on the undercard of Kubrat Pulev vs Bogdan Dinu. Watch the video and rate this fight!

(Free embeddable video hosted on Facebook and not uploaded by AllTheBestFights)
Magdaleno vs Ramos starts around 10:00