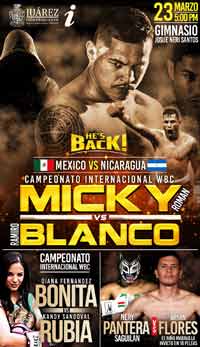 Review by AllTheBestFights.com: 2019-03-23, great performance by both boxers: Miguel Roman vs Ramiro Blanco is close to get four stars!

Miguel Roman entered this fight with a boxing record of 60-13-0 (47 KOs=78%) and he is ranked as the No.10 super featherweight in the world but he comes off the loss against current #1 Miguel Berchelt (5-stars fight, Miguel Berchelt vs Miguel Roman); before this bout, in 2018, he had beat Aristides Perez (Miguel Roman vs Aristides Perez) and Michel Marcano (Miguel Roman vs Michel Marcano).
His opponent, Ramiro Blanco, has an official record of 18-4-3 (10 knockouts) and he entered as the No.209 in the same weight class but he lost two out of his last three fights, against Patrick Kinigamazi and Andres Gutierrez; between these two bouts he beat Moises Castro. Mickey Roman vs Blanco is valid for the vacant WBC Latino super featherweight title. Watch the video and rate this fight!

(Free embeddable video hosted on Facebook and not uploaded by AllTheBestFights)
Roman vs Blanco starts at 39:00