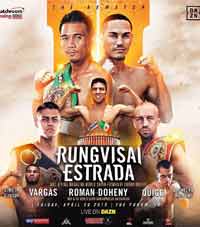 Review by AllTheBestFights.com: 2019-04-26, nice exchanges between Jessie Vargas and Humberto Soto: it gets three stars.

The former world champion in two different weight classes Jessie Vargas entered this fight with a professional record of 28-2-2 (10 knockouts) and he is ranked as the No.11 welterweight in the world. He lost to Manny Pacquiao in 2016 (Pacquiao vs Vargas) but then he has collected one victory, against Aaron Herrera (Jessie Vargas vs Aaron Herrera), and two draws, with Adrien Broner (Adrien Broner vs Jessie Vargas) and Thomas Dulorme (Jessie Vargas vs Thomas Dulorme).
His opponent, the former world champion in three different weight classes Humberto Soto, has a boxing record of 69-9-2 (37 knockouts) and he entered as the No.21 in the same weight class. He was defeated by Antonio Orozco in 2015 (Antonio Orozco vs Humberto Soto) but then he has won four bouts defeating Edgar Puerta and Brandon Rios in his last two (Brandon Rios vs Humberto Soto). Vargas vs Soto is on the undercard of Srisaket Sor Rungvisai vs Juan Francisco Estrada 2. Watch the video and rate this fight!