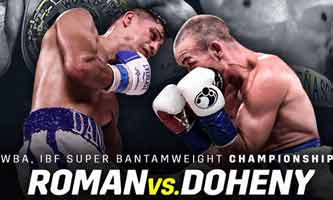 Review by AllTheBestFights.com: 2019-04-26, good fight between Daniel Roman and TJ Doheny: it gets three stars.

The Wba super-Bw champion Daniel Roman entered this fight with a boxing record of 26-2-1 (10 knockouts) and he is ranked as the No.2 super bantamweight in the world (currently the #1 in this division is Rey Vargas). He suffered his last loss when he faced Juan Reyes in 2013, since then he has won 18 consecutive fights beating Ryo Matsumoto (Daniel Roman vs Ryo Matsumoto), Moises Flores (Daniel Roman vs Moises Flores) and Gavin McDonnell in his last three (Daniel Roman vs Gavin McDonnell).
His opponent, the undefeated Ibf super-Bw champ TJ Doheny, has a perfect record of 21-0-0 (15 knockouts) and he entered as the No.6 in the same weight class. In his last three fights he has won over Mike Oliver, Ryosuke Iwasa (Ryosuke Iwasa vs TJ Doheny) and Ryohei Takahashi (TJ Doheny vs Ryohei Takahashi). Roman vs Doheny is valid for the IBF and WBA Super World super bantamweight titles; undercard of Srisaket Sor Rungvisai vs Juan Francisco Estrada 2. Watch the video and rate this fight!