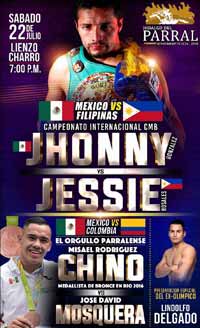 Review by AllTheBestFights.com: 2017-07-22, fight not so exciting between Jhonny Gonzalez and Jessie Rosales: it gets two stars.

The former world champion in two different weight classes Jhonny Gonzalez entered this fight with a pro boxing record of 63-10-0 (53 KOs=84%) and he is ranked as the No.13 super featherweight in the world while his opponent, the undefeated Jessie Cris Rosales, has a record of 21-0-1 (9 knockouts). Both boxers have already fought once in 2017: Gonzalez has beat Francisco Contreras (=Gonzalez vs Contreras) while Rosales has won over Jerry Nardo. Jhonny Gonzalez vs Jessie Cris Rosales is valid for the WBC Latino super featherweight title. Watch the video and rate this fight!