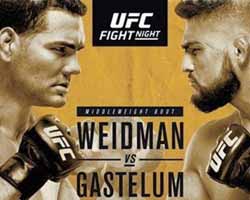 Review by AllTheBestFights.com: 2017-07-22, good fight between Chris Weidman and Kelvin Gastelum: it gets three stars.

The black belt in Brazilian jiu-jitsu and former Ufc Mw champion Chris Weidman entered this fight with a pro mma record of 13-3-0 (69% finishing rate) and he is ranked as the No.7 middleweight in the world (currently the #1 in this division is Michael Bisping) but he comes off three consecutive losses: against Luke Rockhold (=Weidman vs Rockhold), Yoel Romero Palacio (=Weidman vs Romero) and Gegard Mousasi (=Weidman vs Mousasi).
His opponent, the Tuf 17 winner Kelvin Gastelum, has a record of 13-2-0 (69% finishing rate) and he entered as the No.10 in the same weight class. He lost to Neil Magny in 2015 (via split decision, Magny vs Gastelum) but then he has won over Johny Hendricks (=Hendricks vs Gastelum), Tim Kennedy (=Gastelum vs Kennedy) and Vitor Belfort (then overturned in a no-contest after he tested positive for marijuana – Belfort vs Gastelum). Chris Weidman vs Kelvin Gastelum is the main event of UFC on Fox 25. Watch the video and rate this fight!

(Free embeddable video hosted on Youtube and not uploaded by AllTheBestFights)
https://www.youtube.com/watch?v=vgn-48ao4aU