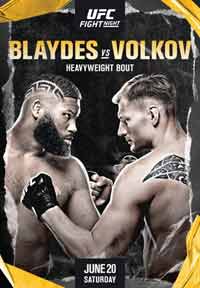 Review by AllTheBestFights.com: 2020-06-20, pretty good finish between Jim Miller and Roosevelt Roberts but it is not enough to get three stars: it gets two (UFC Performance of the Night).
The black belt in Brazilian jiu-jitsu Jim Miller entered this fight with a professional record of 31-14-0 (68% finishing rate) and he is ranked as the No.39 lightweight in the world but he comes off the loss against Scott Holtzman; before this bout, in 2019, he had beat Clay Guida (Clay Guida vs Jim Miller) and Jason Gonzalez.
His opponent, Roosevelt Roberts, has a mma record of 10-1-0 (80% finishing rate) and he entered as the No.59 in the same weight class. He was defeated by Vinc Pichel last year but then he has won over Alexander Yakovlev and Brok Weaver. Miller vs Roberts is on the undercard of Curtis Blaydes vs Alexander Volkov – UFC on ESPN 11. Watch the video and rate this fight!