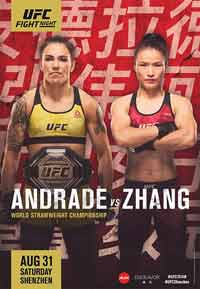 Review by AllTheBestFights.com: 2019-08-31, pretty good fight between Elizeu Zaleski dos Santos and Li Jingliang: it gets three stars (UFC Performance of the Night).

Elizeu Zaleski dos Santos entered this fight with a mma record of 21-5-0 (81% finishing rate) and he is ranked as the No.23 welterweight in the world. ‘Capoeira’ dos Santos was defeated by Nicolas Dalby in 2015 but then he has won seven bouts defeating Sean Strickland, Luigi Vendramini and Curtis Millender in his last three (Curtis Millender vs Elizeu Zaleski dos Santos).
His opponent, Li Jingliang, has an official record of 16-5-0 (69% finishing rate) and he entered as the No.81 in the same weight class. He lost to Jake Matthews last year (Jingliang Li vs Jake Matthews) but then he has beat Daichi Abe and David Zawada. Dos Santos vs Jingliang is on the undercard of Jessica Andrade vs Weili Zhang – UFC Fight Night 157 (UFC on ESPN+ 15). Watch the video and rate this fight!