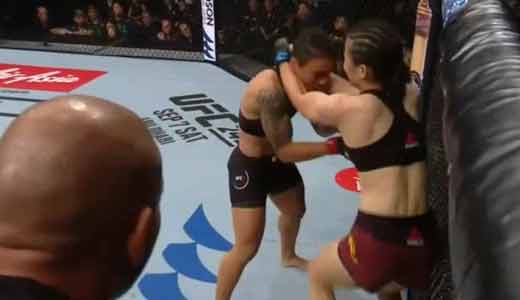 Review by AllTheBestFights.com: 2019-08-31, amazing start with some tough exchanges: Jessica Andrade vs Weili Zhang is one of the best mma fights of the year 2019 and it gets four stars (UFC Performance of the Night).

The Ufc champion Jessica Andrade entered this fight with a pro mma record of 20-6-0 (70% finishing rate) and she is ranked as the No.1 women’s strawweight in the world. . ‘Bate Estaca’ Andrade lost to Joanna Jedrzejczyk in 2017 (Jedrzejczyk vs Andrade) but then she has won four bouts defeating Karolina Kowalkiewicz (Jessica Andrade vs Karolina Kowalkiewicz) and Rose Namajunas in her last two (Rose Namajunas vs Jessica Andrade).
Her opponent, Weili Zhang, has a record of 19-1-0 (84% finishing rate) and she entered as the No.5 in the same weight class. She suffered her only loss when she faced Meng Bo at her professional mma debut in 2013, since then she has won 19 consecutive bouts beating Danielle Taylor, Jessica Aguilar and Tecia Torres in her last three (Tecia Torres vs Weili Zhang). Andrade vs Zhang, main event of UFC Fight Night 157 (UFC on ESPN+ 15), is valid for the Ufc women’s strawweight title (Andrade’s first defense). Watch the video and rate this fight!