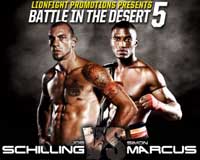 Review: 2012-02-25, unfortunately the fight between Joe Schilling and Simon Marcus was conditioned by a fall in the first round, which was followed by two knockdowns; we think a rematch would be fair (fight ended by TKO in the first round). Joe Schilling (12-1-0) entered as the No.11 light heavyweight in the world while the undefeated Simon Marcus (22-0-0) entered as the No.1 super light heavyweight. Schilling vs Marcus is the main event of “Battle in the Desert 5”. Watch the video!

Event: Battle in the Desert 5