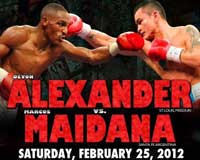 Review: 2012-02-25, we expected something more from Alexander vs Maidana but it is still a good fight: three stars (fight ended by unanimous decision). Marcos Rene Maidana (31-2-0) entered as the No.4 light welterweight in the world while Devon Alexander (22-1-0) entered as the No.5. Maidana vs Alexander is on the undercard of Adrien Broner vs Eloy Perez. Watch the video!