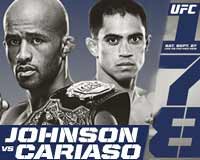 Review: 2014-09-27, pretty good finish between Demetrious Johnson and Chris Cariaso but it is not enough to get three stars. The Ufc Flw champion Demetrious Johnson entered this fight with a professional mma record of 20-2-1 (55% finishing rate) and he is ranked as the No.1 flyweight in the world, he suffered his last defeat in 2011 when he faced Dominick Cruz for the Ufc Bw title (=Cruz vs Johnson), after that bout he moved down in weight class and he collected one draw and six consecutive wins; ‘Mighty Mouse’ Johnson has already fought in 2014 successfully defending his belt against Ali Bagautinov (=Johnson vs Bagautinov).
His opponent, Chris Cariaso, has an official record of 17-5-0 (29% finishing rate) and he entered as the No.14 in the same weight class, he suffered two consecutive defeats between 2012 and 2013, against John Moraga (=Moraga vs Cariaso) and Jussier ‘Formiga’ da Silva, but then he came back to win defeating Iliarde Santos in 2013; he has fought twice in 2014 beating Danny Martinez and Louis Smolka (=Cariaso vs Smolka). Johnson vs Cariaso, main event of Ufc 178, is valid for the Ufc flyweight title (Johnson’s fifth defense). Watch the video and rate this fight!