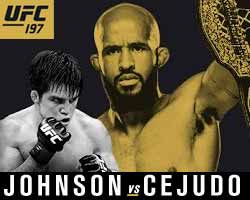 Review by AllTheBestFights.com: 2016-04-23, great fight between Demetrious Johnson and Henry Cejudo: it gets three stars (UFC Performance of the Night).

The Ufc Flw champion Demetrious Johnson entered this fight with a pro record of 23-2-1 (57% finishing rate) and he is ranked as the No.1 flyweight in the world. He suffered his last loss when he faced Dominick Cruz in 2011 (= Cruz vs Johnson), since then he has collected one draw and nine consecutive victories beating Kyoji Horiguchi (=Johnson vs Horiguchi) and John Dodson in 2015 (=Johnson vs Dodson 2).
His opponent, the 2008 Olympic gold medallist in freestyle wrestling Henry Cejudo, has a perfect mma record of 10-0-0 (40% finishing rate) and he entered as the No.3 in the same weight class. He fought three times last year winning over Chris Cariaso (=Cariaso vs Cejudo), Chico Camus (=Cejudo vs Camus) and Jussier Formiga da Silva (=Formiga vs Cejudo). Johnson vs Cejudo is valid for the Ufc flyweight title (Johnson’s eighth defense); undercard of Jon Jones vs Ovince Saint Preux – UFC 197; they also faced each other a second time on August 4, 2018 (Demetrious Johnson vs Henry Cejudo 2(. Watch the video and rate this fight!