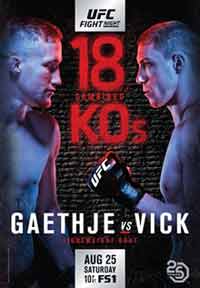 Review by AllTheBestFights.com: 2018-08-25, good fight between Andre Fili and Michael Johnson: it gets three stars.

Andre Fili entered this fight with a pro mma record of 18-5-0 (61% finishing rate) and he is ranked as the No.27 featherweight in the world. He lost to Calvin Kattar last year but then he has won over Artem Lobov and Dennis Bermudez (Dennis Bermudez vs Andre Fili).
His opponent, Michael Johnson, has a record of 17-13-0 (59% finishing rate) and he entered as the No.35 in the same weight class but he won just one out of his last six bouts, against Dustin Poirier in 2016 (Poirier vs Johnson). After this fight he was defeated by Khabib Nurmagomedov (Johnson vs Nurmagomedov), Justin Gaethje (Mma Fight of the Year 2017, Johnson vs Gaethje) and Darren Elkins (Darren Elkins vs Michael Johnson). Fili vs Johnson is on the undercard of Justin Gaethje vs James Vick – UFC Fight Night 135. Watch the video and rate this fight!

(Free embeddable video hosted on Youtube and not uploaded by AllTheBestFights)
https://www.youtube.com/watch?v=f0bU_uj__6U