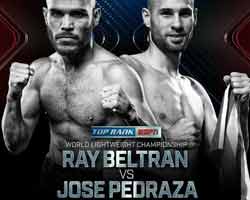 Review by AllTheBestFights.com: 2018-08-25, pretty good fight between Raymundo Beltran and Jose Pedraza: it gets three stars.

The Wbo Lw champion Raymundo Beltran entered this fight with a professional record of 35-7-1 (21 knockouts) and he is ranked as the No.5 lightweight in the world (currently the #1 in this division is Vasyl Lomachenko). He suffered his last loss when he faced Terence Crawford in 2014 (Crawford vs Beltran), since then he has collected one no-contest and six victories beating Jonathan Maicelo (4-stars fight, Beltran vs Maicelo), Bryan Vasquez (Raymundo Beltran vs Bryan Vasquez) and Paulus Moses in his last three (Raymundo Beltran vs Paulus Moses).
His opponent, the former Olympian and former Ibf and Ibo super-Fw champion Jose Pedraza, has an official boxing record of 24-1-0 (12 knockouts) and he entered as the No.15 in the same weight class. He lost to Gervonta Davis last year (Jose Pedraza vs Gervonta Davis) but then he has beat Jose Luis Rodriguez and Antonio Moran in 2018 (Jose Pedraza vs Antonio Moran). Pedraza vs Beltran is valid for the WBO World lightweight title (Beltran’s first defense). Watch the video and rate this fight!