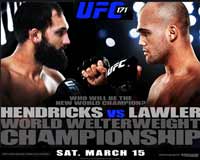 Review: 2014-03-15, nice, tough and close fight: Johny Hendricks vs Robbie Lawler gets three stars (UFC Fight of the Night). Johny Hendricks entered this fight with a professional mma record of 15-2-0 (60% finishing rate, with just one victory via submission) and he is ranked as the No.2 welterweight in the world, last year he fought twice winning the first fight against Carlos Condit(=Condit vs Hendricks) but then he lost via split decision to #1 Ww Georges St Pierre in a very close bout valid for the Ufc welterweight title (=St Pierre vs Hendricks).
His opponent, Robbie Lawler, has an official record of 22-9-0 (87% finishing rate, with just one victory via submission) and he entered as the No.5 in the same weight class, he is undefeated in the Ufc and he comes off three consecutive wins. Hendricks vs Lawler is valid for the vacant UFC welterweight title, main event of UFC 171; they also faced each other a second time on December 6, 2014 (=Hendricks vs Lawler II). Watch the video and rate this fight!