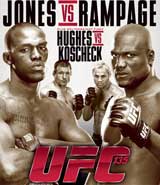 Review: 2011-09-24, the main fight of the UFC 135 between Jon Jones and Quinton “Rampage” Jackson had a low pace and was not as spectacular as we expected (2 stars) even if it was awarded as “Fight of the Night”. Jon Jones (13-1-0) entered as the No.1 light heavyweight in the world while Quinton Jackson (32-8-0) entered as the No.4. Jon Jones submitted Rampage Jackson in the fourth round retaining his UFC Light Heavyweight belt. Watch the video!