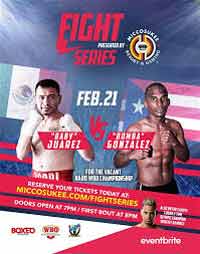 Review by AllTheBestFights.com: 2020-02-21, fight not particularly good between Saul Juarez and Jonathan Gonzalez: it gets two stars.

Saul Juarez entered this fight with a boxing record of 25-10-2 (13 knockouts) and he is ranked as the No.10 light flyweight but he lost two out of his last three fights, against current #1 Ken Shiro in 2018 and Ganigan Lopez in 2019 (Saul Juarez vs Ganigan Lopez); between these two bouts he beat Mario Andrade (Saul Juarez vs Mario Andrade 2).
His opponent, Jonathan Gonzalez, has an official record of 22-3-1 (13 knockouts) and he entered as the No.18 in the same weight class but he also comes off a defeat, suffered against Kosei Tanaka in 2019 (Kosei Tanaka vs Jonathan Gonzalez); before this bout, in 2018, he had beat Ricardo Rodriguez, Julian Yedras and Juan Alejo. Juarez vs Gonzalez is valid for the vacant WBO NABO light flyweight title. Watch the video and rate this fight!