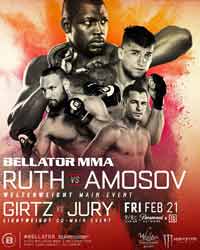 Review by AllTheBestFights.com: 2020-02-21, fight not so exciting between Ed Ruth and Yaroslav Amosov: it gets two stars.

Ed Ruth entered this fight with a professional mma record of 8-1-0 (75% ko/tko victory rate – he has never won via submission) and he is ranked as the No.89 welterweight in the world. He suffered his only loss when he faced Neiman Gracie in 2018 (Neiman Gracie vs Ed Ruth), after this bout he has beat Kiichi Kunimoto and Jason Jackson.
His opponent, the undefeated Yaroslav Amosov, has a perfect record of 22-0-0 (82% finishing rate) and he entered as the No.62 in the same weight class. In his last three fights he has won over Gerald Harris, Erick Silva and David Rickels. Ruth vs Amosov is the main event of Bellator 239. Watch the video and rate this fight!