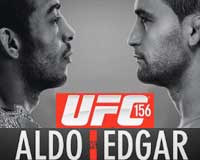 Review: 2013-02-02, just some good single shots between Jose Aldo and Frankie Edgar: two stars (UFC Fight of the Night). Jose Aldo (21-1-0) entered as the No.1 featherweight in the world while Frankie Edgar (15-3-1) entered as the No.2 lightweight. Aldo vs Edgar is valid for the UFC featherweight title (Aldo’s sixth defense WEC-UFC Fw title); main event of UFC 156. Watch the video!