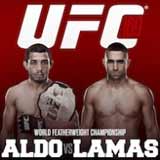 Review: 2014-02-01, something good in the last part of the fight and some good kicks in the first one, but it is not enough to get three stars: Jose Aldo vs Ricardo Lamas gets two. The Ufc featherweight champion and black belt in Brazilian jiu-jitsu Jose Aldo entered this fight with a professional mma record of 23-1-0 (70% finishing rate) and he is ranked as the No.1 featherweight in the world, he suffered his only defeat in 2005 against Luciano Azevedo, so he comes off 16 consecutive wins!
His opponent is the American Ricardo Lamas who has an official record of 13-2-0 (54% finishing rate) and he entered as the No.8 in the same weight class, he is also a black belt in bjj and he is undefeated in the Ufc. Aldo vs Lamas is valid for the Ufc featherweight title, first title shot for Lamas; undercard of Renan Barao vs Urijah Faber 2 – UFC 169. Watch the video and rate this fight!