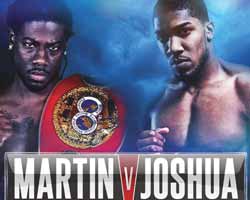 Review by AllTheBestFights.com: 2016-04-09, pretty good fight between Anthony Joshua and Charles Martin: it gets three stars.

Both undefeated, the Ibf Hw champion Charles Martin entered this fight with a pro boxing record of 23-0-1 (21 KOs=91%) and he is ranked as the No.7 heavyweight in the world while his opponent, the 2012 Olympic super-heavyweight gold medalist Anthony Joshua, has a perfect record of 15-0-0 (15 KOs=100%) and he entered as the No.16 in the same weight class (currently the #1 in this division is Tyson Fury). Martin has already fought once in 2016 beating Vyacheslav Glazkov (=Glazkov vs Martin) while Joshua fought five times in 2015 defeating Gary Cornish (=Joshua vs Cornish) and Dillian Whyte in his last two bouts (4-stars-fight Joshua vs Whyte). Martin vs Joshua is valid for the IBF World heavyweight title (Martin’s first defense). Watch the video and rate this fight!