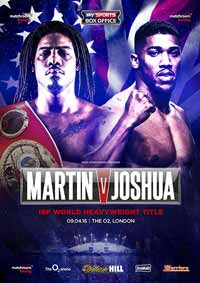 Review by AllTheBestFights.com: 2016-04-09, pretty good fight between Jamie McDonnell and Fernando Vargas: it gets three stars.

Jamie McDonnell entered this fight with a pro boxing record of 27-2-1 (12 knockouts) and he is ranked as the No.2 bantamweight in the world (currently the #1 in this division is Shinsuke Yamanaka). He suffered his last loss when he faced Lee Haskins in 2008, after this bout he has won 19 consecutive fights beating twice Tomoki Kameda in 2015 (Kameda vs McDonnell I and McDonnell vs Kameda II).
His opponent, Fernando Vargas, has an official boxing record of 29-9-3 (20 knockouts) and he entered as the No.57 featherweight. He fought twice last year losing to Andres Tapia and winning over Wilfredo Vazquez Jr. McDonnell vs Vargas is valid for the WBA World bantamweight title; undercard of Anthony Joshua vs Charles Martin. Watch the video and rate this fight!