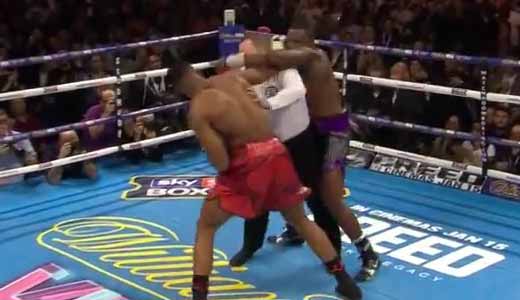 Review by AllTheBestFights.com: 2015-12-12, very exciting and tough heavyweight battle with also a brutal finish: Anthony Joshua vs Dillian Whyte is definitely one of the best boxing fights of the year 2015 and it gets four stars!

Both undefeated, the 2012 Olympic super heavyweight gold medalist Anthony Joshua entered this fight with a perfect record of 14-0-0 (14 KOs=100%) and he is ranked as the No.17 heavyweight in the world while his opponent, Dillian Whyte, has a boxing record of 16-0-0 (13 KOs=81%) and he entered as the No.43 in the same weight class. Both boxers have already fought four times in 2015: Joshua has defeated Gary Cornish in his last fight (=Joshua vs Cornish) while Whyte has beat Brian Minto. Joshua vs Whyte is valid for the WBC International, Commonwealth and vacant BBBofC British heavyweight titles. Watch the video and rate this fight!