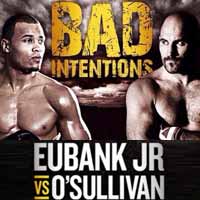 Chris Eubank Jr entered this fight with a professional record of 20-1-0 (15 KOs=75%) and he is ranked as the No.8 middleweight in the world (currently the #1 in this division is Saul ‘Canelo’ Alvarez) while his opponent, Gary O’Sullivan, has an official boxing record of 22-1-0 (15 knockouts) and he entered as the No.45 in the same weight class. Both boxers suffered their only loss against Billy Joe Saunders: Eubank was defeated via split decision in 2014 (=Saunders vs Eubank) while O’Sullivan lost by unanimous decision in 2013 (=Saunders vs O’Sullivan). After losing Eubank Jr has beat Dmitry Chudinov (bout valid for the interim Wba Mw title, Chudinov vs Eubank) and Tony Jeter (=Eubank vs Jeter) while ‘Spike’ O’Sullivan has won six consecutive bouts. Eubank vs O’Sullivan is on the undercard of Anthony Joshua vs Dillian Whyte. Watch the video and rate this fight!