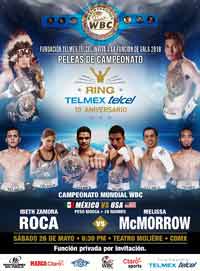 Review by AllTheBestFights.com: 2018-05-26, some good exchanges between Julio Ceja and Franklin Manzanilla but it is not enough to get three stars: it gets two.

The former Wbc super-Bw champion Julio Ceja entered this fight with a pro record of 32-2-0 (28 KOs=87%) and he is ranked as the No.7 super bantamweight in the world (currently the #1 in this division is Luis Nery). Between 2015 and 2016 he faced twice Hugo Ruiz: in their first fight ‘Pollito’ Ceja had beat Ruiz (Ceja vs Ruiz I) while in their rematch he was defeated (Ceja vs Ruiz II); after this bout Ceja has beat Anselmo Moreno (Moreno vs Ceja) and Breilor Teran (Julio Ceja vs Breilor Teran).
His opponent, Franklin Manzanilla, has an official boxing record of 17-4-0 (16 KOs=94%) and he entered as the No.76 in the same weight class. He lost to Belmar Preciado in 2017 but he came back to win with Francisco Herrera in 2018. Manzanilla vs Ceja is valid for the WBC Silver super bantamweight title; undercard of Ibeth Zamora Silva vs Melissa McMorrow. Watch the video and rate this fight!