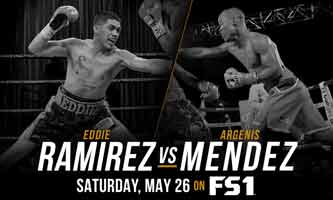 Review by AllTheBestFights.com: 2018-05-26, pretty good fight between Eddie Ramirez and Argenis Mendez: it gets three stars.

Eddie Ramirez entered this fight with a boxing record of 17-1-0 (11 knockouts) and he is ranked as the No.77 welterweight in the world but he comes off his first loss, suffered against Antonio DeMarco last year; before this bout, in 2017, he had defeated Erick Bone in June and Ryan Karl in February.
His opponent, the former Olympian and former Ibf super-Fw champion Argenis Mendez, has an official record of 24-5-1 (12 knockouts) but he is not ranked as he hasn’t fought since May 2, 2017 when he beat Ivan Redkach; before this fight, in 2016, he had lost two consecutive bouts, against Luke Campbell in July (Luke Campbell vs Argenis Mendez) and Robert Easter Jr in April (Mendez vs Easter Jr). Mendez vs Ramirez is the main event of the evening. Watch the video and rate this fight!