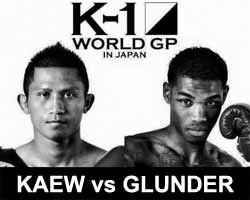 Review by AllTheBestFights.com: 2016-03-04, fight not particularly exciting between Kaew Fairtex and Massaro Glunder: it gets two stars.

The former Lumpinee, Wbc and Wpmf muay thai champion Kaew Fairtex (also known as Kaew Weerasakreck) entered this fight with a professional kickboxing record of 134-31-4 (42 knockouts) and he is ranked as the No.1 super lightweight in the world. Kaew fought five times in 2015 losing the first bout against Minoru Kimura (by majority decision), but then he won four consecutive fights taking revenge on Kimura in his last bout (=Kaew vs Kimura 2).
His opponent, Massaro Glunder, has an official record of 19-5-0 (8 knockouts) and he entered as the No.6 in the same weight class. He lost twice last year, against Minoru Kimura and Cedric Manhoef, but then he won three fights. Kaew vs Glunder is the main event of the K-1 World GP 2016 -65kg Japan tournament. Watch the video and rate this fight!