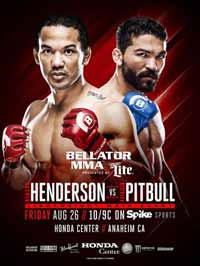 Review by AllTheBestFights.com: 2016-08-26, nice finish between Bubba Jenkins and Georgi Karakhanyan: it gets three stars.

Bubba Jenkins entered this fight with a pro mma record of 11-2-0 (64% finishing rate) and he is ranked as the No.27 featherweight in the world. He lost to Georgi Karakhanyan in their first fight last year (=Karakhanyan vs Jenkins I) but then he has won three consecutive bouts beating Goiti Yamauchi in his last one (=Yamauchi vs Jenkins).
His opponent, the black belt in Bjj and former WSOF Fw champion Georgi Karakhanyan, has a record of 24-6-1 (75% finishing rate) and he entered as the No.38 in the same weight class but he won just one out of his last four fights, against Jenkins. After this bout he has lost to Daniel Weichel (=Weichel vs Karakhanyan) and Pat Curran (=Curran vs Karakhanyan). Jenkins vs Karakhanyan 2 is on the undercard of Benson Henderson vs Patricio Freire – Bellator 160. Watch the video and rate this fight!